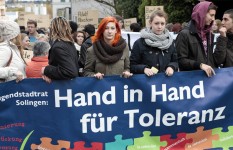 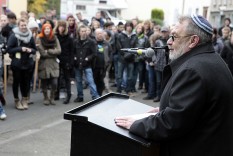 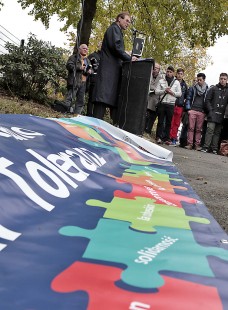 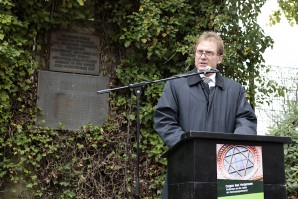 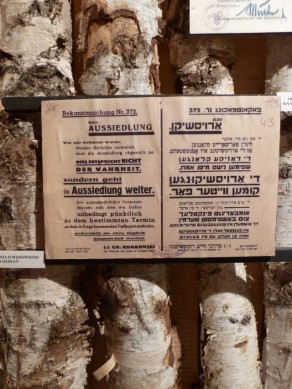 In the woods of Kulmhof/Chelmno there is another memorial site for the more than 100,000 victims who were buried here. July 2012. 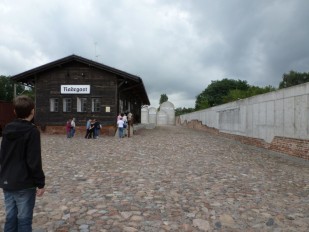 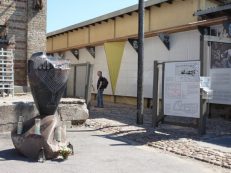 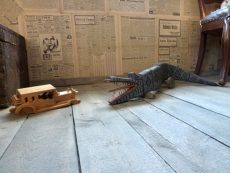 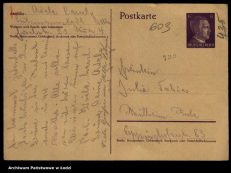 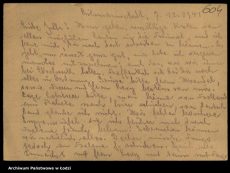 70 years after Albert Tobias‘ violent death at Kulmhof I published an article about our research on him in the Solinger Tageblatt of May 5, 2012:

Even his family remainded silent

Actually it was just a simple history class homework of my 11 year old daughter Noa that started a tremendous family research last fall that is still increasing. „Write down your ancestors up to your greatgrandparents” was the task for 5th grade at Humboldtschool. I already had a family tree of my own family going back to the 18th century, gathered up from several church archives. But on my husband’s side there were many question marks left, most of all concerning his grandfather Albert Tobias.

The jewish grandfather Albert Tobias was considered missing at the Ghetto of Lodz. Today at Menzelstr. 15, the former home of the family, there lies a „Stolperstein” showing the scarce dates of a life that was violently aborted by the Nazis. But there was no photograph, no story, no familial rememberance. Many families are familiar with the big silence after WWII. But not only culprits and followers remained silent, even the victims did so in many cases. Especially those who lived in the legal grey area of the so called „mixed wedlocks” for years, those who could never be sure how
long and by which kind of behaviour the „arian” part of the family will be able to protect the jewish part and when they will be targeted themselves as well.

Albert Tobias, a young sales clerk from Neuwied, ended up at a military hospital in the Bergisches Land during WWI. Here he came to know the protestant young woman Antonie Jacoby. After their wedding and the birth of their first son he opened a mens‘ clothing shop in Antonie’s hometown Wald, then an autonomous town in the district of Solingen.

This business existence which later should have assured the sons‘ livings as well was smashed in smithers during the nationwide „Pogromnight” in november 1938. Albert was arrested and deportet to Dachau. At this threatening situation Antonie made a momentous decision – she filed for divorce. That’s the point where all stories break off.

The time of the contemporary witnesses is elapsing. We could talk to a niece of Albert we were completely unaware of before our research. She died all of a sudden right before a planned meeting in february. Nevertheless it was a thrilling experience to hear somebody say: „Uncle Albert was such a dear man! My father got him back from Dachau and he lived with us at Cologne untill he had to go to Lodz.”

The letter his younger brother Max wrote in order to espouse his dismissal is part of the Gestapo-file at the state archive of Northrhine-Westphalia. There also is kept the denazification-file of Eugen Kemper by which we get to know that the accountant from Wald not only took care of the bookkeeping but was friends with Albert as well. The NS-documentation-center of Cologne told us that there are postcards from the Ghetto that have never been delivered at the state archive of Lodz. Albert wrote several ones: to his sister at Mülheim and to his son, to friends at Cologne.

The most important document for us however is Albert Tobias‘ last letter he wrote to the camp administration. Albert got a note at the end of april 1942 saying he will be resettled to a work camp. Most of the affected people anticipated what this meant. Albert too pleaded for deferment. He argued his sons were soldiers on the battle field by that time.

His request was declined. On may 4, 1942 the 50 year old Albert and another 1000 ghetto-inhabitants were deported to Kulmhof/Chelmno. It was the birthday of his eldest son. Probably Albert was murdered by exhaust gases from a converted truck the next morning – exactly 70 years from today. Until may 15 there were more than 10.000 murdered at Kulmhof. It was just one of several waves of destruction.

The initial history class homework meanwhile became an expansive project about a widely ramified jewish family from the Westerwald. Many members died in Europe, some managed to emigrate and very few are still living in Germany. Almost daily there are new pieces in the puzzle found. The next step will be an article for the annual report of the Bergisch history society.