In 1862, Tobias „Theodore“ Tobias, the third child of Herz Tobias and Olisa Herz, was the first to venture the New World. A wave of emigration had been rolling across Germany since the 1840s. America was calling for hardworking and skilled people to help build the country and make their fortune. It was especially young men from rural areas, with little chance to inherit enough land to make a living, who took the chance to settle in a wide open space. There were also Jewish businesspeople, who were hoping to establish their enterprises as equal citizens, without any discrimination. Some of them stayed in New York after arrival and maintained commercial relations with their home country, while others moved south as cattle dealers.

The situation for Jewish men in the Westerwald area was surely difficult. Almost all of them were peddlers and butchers competing with each other. New bills had been passed in the middle of the century that brought civil equality for Jews, but in daily life that equality often was in name only. We don’t know the personal motivation of Tobias Tobias and how he could afford the travel expenses, but we found his name on a ship manifest from 1862. He was listed as a 24-year old farmer who embarked from Bremerhaven. One row below him on the manifest was another farmer, 33-year old Johannes Koch, who might have been a neighbour from Raubach, not far from Oberdreis. The ship arrived in New York on August 18, 1862. No Ellis Island to pass, no Statue of Liberty to welcome them, no skyscrapers to gape at. Trinity Church was probably the tallest building in Manhattan at that time.

Tobias changed his name to Theodore Tobias and moved to Hartford, Connecticut, where a Jewish community of German-Austrian origin had been established after the Revolutionary War. We find a first mention of his new name in the Hartford Daily Courant on September 21, 1865. He was arrested for purchasing goods under false pretenses and causing losses to other businesses of more than $500, but it was reported that maybe he was able to reimburse the aggrieved parties. The final outcome of the situation was not published.

Obviously the nasty encounter with Justice didn’t compromise Theodore’s reputation, because soon after, in July 1867, he married Pauline Freeman, sister of the Hartford clothing merchant Solomon Freeman. Pauline, Solomon and their siblings Jacob, Alexander and Julia had come to the United States with their uncle Samuel in the 1860s and changed their German name Freiman to Freeman. Samuel and his brother Ignatz were born in Hohenems, Vorarlberg, a center of Jewish life in Austria at the time. Ignatz was married to Sophie Berliner of Buchau, Württemberg, another Jewish center in southern Germany. Ignatz and Sophie lived in Ettendorf, Alsace, but only married after Pauline was born in Nagelsberg, Künzelsau which caused some trouble with the authorities. Probably Sophie was working as a traveling saleswoman like her husband. Ignatz and Sophie moved to Buchau after their children emigrated to America. Both are buried in the Jewish cemetery of Buchau.

The first child of Theodore and Pauline was born in February 1868. Her name was Alice, probably after Theodore’s mother “Olisa.” The second child, Herman, was born in January 1872. His name might be a Germanized version of Herz, Theodore’s father’s name. The third child, Sophie, named after Pauline’s mother, was born in December 1874 and Solomon, number four, was born on July 11, 1876, and named after Pauline’s grandfather Salomon Freiman. The same year Theodore became the proprietor of the “Boston Clothing Store” on Asylum Street in Hartford. It’s not clear if this was really his own shop or somehow connected to Solomon Freeman’s Clothing Bazaar, also on Asylum Street. While Solomon ran several advertisements in the Hartford Courant during the 1870s there is none for a shop owned by Theodore.

In private life Theodore had to accept several setbacks. In January 1873 his house in Canton almost burnt down one night, while the family was asleep. At the last minute, the main residential part of the house was saved. In January 1874 his sister-in-law, Julia Freeman, committed suicide while staying at his other house in Hartford. She could not be rescued despite immediate medical attention. She had been depressed for some time, and one night she took arsenic. Her father Ignatz and her youngest brother Martin had arrived in Hartford only a few months before. We can’t tell if they were still in town when Julia died. She was only 22 years old.

In June 1878, another fire finally destroyed Theodore’s home in Canton. Again the fire broke out in the middle of the night. Luckily the family still owned the house in Hartford and moved there the next morning. Theodore sold his Canton properties in 1879. In the 1880 census he was listed as a Jewelry Peddler.

End of 1881, Theodore filed for a divorce, because Pauline allegdely had an affair with her neighbor Robert Miller from Hartford for several years. The verdict was handed down on January 4, 1882, and Pauline was found guilty. On July 13, 1882, Theodore married Mary Kronacher in Manhattan. We don’t know if Pauline suffered from depression like her sister Julia, but the week after this wedding she was arrested for drunkenness, which turned out to be more of an “unsound mind.” The note in the Hartford Courant about this incident is the last trace we have of her as of now. Robert Miller, a filemaker, appears in the 1900 census of Hartford for the last time. There is no wedding record. Obviously the divorce was a social annihilation for Pauline.

On June 10, 1883 Mary Kronacher gave birth to Theodore’s fifth child, Mayer Emanuel Tobias. The pair had another daughter, Dora, born on November 7, 1888. Mary died on June 15, 1906 and Theodore passed away in 1908. We have not been able to find an obituary for him. Both are buried in Beth Israel Cemetery, Hartford. 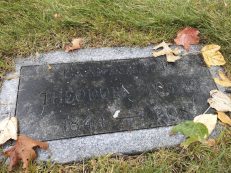 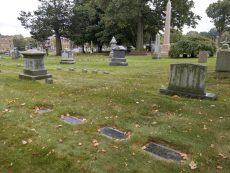 Theodore Tobias‘ grave at the Jewish cemetery of Hartford.

Theodore’s eldest daughter, Alice, married an Irish Catholic, Kyran William O’Neill, in 1886. They had six children. His son Herman married twice but had no children. He ran several hotels in Hartford and died in September 1936 in Old Saybrook, Connecticut. Theodore’s daughter Sophie married Samuel Steiner and also had no children. She died in Old Saybrook on August 17, 1933. His son Solomon married Lena Oppenheimer and had six children. His family played an important role in helping German relatives to emigrate during the Nazi era. His son Mayer Emanuel moved to New York and ran a shoe factory with a partner named Pincus. He was married to Antonia Hahn and had one daughter, Miriam (1913-1979). We don’t know when he passed away. Theodore’s daughter Dora was married to Louis Mohill and had one daughter Miriam Mohill Astmann (1918-2002). Dora passed away in West Hartford on August 30, 1970.