Sophia, the eldest daughter of Moses and Jettchen Tobias, was born on October 2, 1881, in Heimbach-Weis. Like all her sisters she got an endowment of approximately 15,000 Reichsmark when she married Moses Mayer, a cattle dealer of Müllenbach, Kaisersesch. Moses’ brother Emanuel ran a butcher shop in Müllenbach, which he had taken over from his father. Both Emanuel’s wife Johanna and Sophia helped behind the counter. Moses and Emanuel had a sister named Rebecca, who married Leopold Felsenthal of Kusel. Rebecca and Leopold emigrated to New York in January 1928. The eldest daughter of Sophia and Moses was named Erna. She was born on June 17, 1910. In August 1928, she followed her Aunt to New York and worked as a house maid. The second daughter, Frieda, was born June 23, 1911. She went to New York in January 1929. The third daughter, Selma, born on June 17, 1913, also fled to New York in December 1937. At the time, the business of Moses and Emanuel was already disrupted by the Nazi boycott. After their homes were destroyed during Kristallnacht and they were forced to live together at Emanuel’s house, the families lived in constant fear. Sophia and Moses’ daughter Else, born on May 27, 1918, lived with her husband Max Schmitz in Binningen. Her sister Lilly, born on July 7, 1921, also lived with Else in Binningen. Only Julius, the only son of Sophia and Moses born on December 1, 1923, still lived in Müllenbach when his parents decided to leave for the United States as well.

After Germany declared war on the Netherlands, one of the few possibilities for Jewish refugees to board a ship was the port of Genoa, Italy. Sophia and Moses missed the first passage they booked, but made it on board the “SS. Washington” which left Genoa on May 19, 1940. It was the last vessel that allowed Jewish refugees abroad, before Germany declared war on Italy.

Erna had married Paul Otto Leinhos in March 1935. The pair lived at 526 East 139th Street, Bronx, when Erna’s parents arrived in New York. They probably planned to get Else, Lilly and Julius to the United States as well, but it was too late for them. Bella and Walter Jakob Mayer, the children of Moses’ brother, had made it to New York prior to 1937, but Emanuel and Johanna, Else and her husband Max, Lilly and Julius were deported from Koblenz, probably to the district of Izbica in April 1942. Only the names of Emanuel and Johanna were recorded. The others disappeared without a trace.

Sophia and Moses lived on 977 Simpson Street, in the Bronx, when Moses died on August 24, 1943, at the age of 64. Sophia passed away on 21 September, 1962 in Brookhaven on Long Island, where she lived with her daughter Selma’s family. Sophia was buried beside her husband on Cedar Park & Beth El Cemetery, Bergen, New Jersey. Selma was married to John Frank Fischel and had three sons: Edward, Johnny and Robert. The youngest son died in a car accident at 22 years old. Selma died on July 20, 1985 in Centereach, Suffolk County. Frieda Mayer, wife of Frank Shaw, died on Februar 15, 1994 in the Bronx. After the divorce from Paul Leinhos Erna Mayer married a second time and lived under the name of Costas until her death on March 22, 2000 in Mc Lean, Fairfax, Virginia. 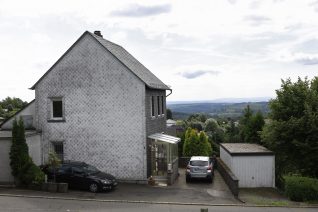 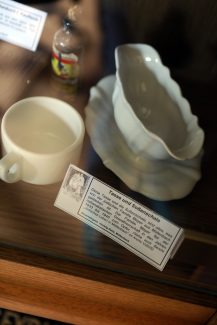 Coffeecup and sauciere from sister-in-law Johanna Mayer, which a befriended neighbor held dear and used it every day for her morning coffee until her death. 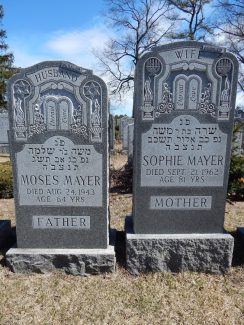