Robert Kronenthal is born on November 23, 1896 in Neuwied as the son of the butcher Josef Kronenthal and his wife Emilie Hertz. His sister Therese dies at three years old. His second sister Alice is ten years younger than Robert.

Father Josef Kronenthal runs a prosperous pork and ox butchery at Schlosstraße 20, later at Engerser Straße 15. He provides the duke of Wied and wins a gold medal for his ham which can be obtained by mail order all over Germany.

Robert first goes to the Jewish school in the neighborhood and afterwards attends the Prorealgymnasium. After his exam he starts a commercial apprenticeship at the textile department store Leyens & Levenbach in Wesel, before serving the 6. Rheinisch Infanterie Regiment 68 during WWI.

After the war Robert Kronenthal is employed by the administration of the district office before he switches to the company Winkler & Dünnebier in Neuwied as a commercial clerk.

Between 1919 and 1921 Robert Kronenthal paints subjects from Neuwied and its environs. 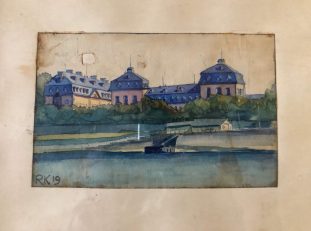 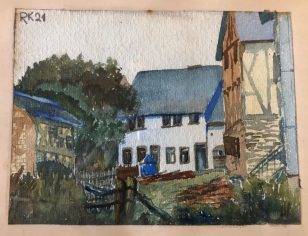 In April 1923 Robert Kronenthal marries Berta Metzig from Marburg, who came to Neuwied with her parents in 1905 and makes an apprenticeship at the company Wick to become a milliner and furrier. 1925 their son Hans Walter is born.

Winkler & Dünnebier manufactures chocolate coating machines among others. The owners originate from Sachsen. Maybe that’s how Robert came in contact with the company Johannes Kegel KG Dresden, that also makes chocolate coating machines and for whom he works as a traveling salesman before he founds his own company „Greco-Maschinenfabrik” together with Oskar Gretschel from Kamenz. It begins operation on July 1, 1928 and is registered on March 22, 1929 as an OHG at the commercial register of Dresden. As of February 20, 1931 Robert Kronenthal is sole owner of the business situated at the industrial area of Albertstadt.

In November 1931 his father Josef marries Dorothea Tobias in Neuwied. Robert’s mother Emilie passed away the year before. Josef Kronenthal dies in 1936 at 67 years old. We know almost nothing about Dorothea. She was born on September 19, 1884. When she was 47 years old she married Josef, a nephew of her grandmother Esther Kronenthal. There are no records about the deportation of Dora, but it’s very likely that she was sent to Izbica, Poland, like most of the Neuwied Jews. There were no survivors.

On March 24, 1938 Robert Kronenthal is forced to sell his company Greco to Kurt Galle. He only gets 1.300,-RM for it. Initially he’s still employed at the company. But in November 1938 he’s deported to Buchenwald, where he spends four weeks as inmate No. 23244 in block 50. After that he is only able to give language lessons in English and French at Jewish schools or for private persons who want to emigrate. His wife Berta also sews hoods and coat lining to make ends meet.

Robert’s sister Alice was able to go to Great Britain like some of her cousins. In 1939 she works as a restaurant cook in Newcastle-upon-Tyne. In December 1942 she marries Hans Klemperer (Jan Klempera) from Teplitz, Czechia in London. The couple lives in West Hampstead, but Hans soon after joines a Czech brigade to fight against the Nazis.

On October 23, 1942 Robert Kronenthal is arrested. The reasons are not known because all Gestapo files are destroyed. Probably he was denounced. It’s incopmprehensible when exactly he is deported to Auschwitz because there are no organized transports from Dresden between October 1942 and January 1943. His death record is issued on January 11, 1943 at Auschwitz.

The internment of the last 300 Dresden Jews to the camp Hellerberg north of Dresden takes place end of November 1942. This group was deported to Auschwitz in March 1943 and mostly killed upon arrival. There are recordings of the deportations to Hellerberg publicised by Yad Vashem.

Also the Romanist Victor Klemperer is an eye witness of the deportations and writes it down in his diary which he later publishes under the title „I Shall Bear Witness”:

Eva said this new kind of evacuation is so shameless because everything happens so openly. What is undoubtedly new is that this time we have a view of the inferno and remain in contact with it. Is it a moderate hell? That remains to be seen. Young Eisenmann, who helped stuff the bedding, etc., said: „Catastrophic!“ Unimaginably crowded and barbarically primitive, especially the latrines (in a row without dividing walls and far, far too few), but also the narrow beds, etc. The carpenters had said they had worked on barracks for Russian and Polish prisoners — luxury hotels compared to this Jews‘ camp in the sand and mud!

Victor Klemperer, who is married to a non-Jew like Robert Kronenthal had to leave his own house already in 1940 and move into a „Jews house” with his wife Eva. The couple manages to go in hiding during the Allied forces attacks on Dresden and so Klemperer escapes the deportation.

Berta and her son Walter survive the heavy bombings of Dresden. In 1947, Berta gets back the factory of her deceased husband, but all of the machines have been taken to another factory which is now in possession of a state-owned company. Although the machines are ordered by the court to be delivered back to her, she never receives  them and has to close the business in 1949.

Alice Kronenthal Klemperer passes away in London on February 10, 1951 due to stomach cancer. She had no children. Her husband died in 1955 from lung cancer.

In February 2014, the Neuwied German-Israeli Friends Association has two Stolpersteine laid for Robert Kronenthal and his stepmother Dora. At 15 Engerser Street there are altogether nine stones commemorating Jewish victims of the Holocaust, who once lived at this address. 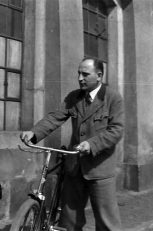 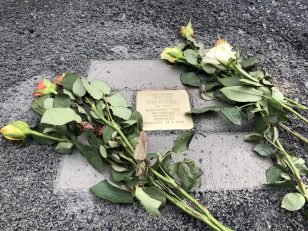