Julius Tobias and his twin-sister Lina, children of Moses Tobias and Jettchen Oestreich, were born on October 15, 1888 in Heimbach-Weis. He was 26 years old when the Great War broke out. Julius served in the 2nd Rheinisches Infanterie-Regiment No. 28, called “von Goeben”, which was based in the fortress of Ehrenbreitstein, Koblenz, not far from his home town. His unit was sent to Belgium via Luxemburg and met the French troops on August 22, 1914, near Neufchâteau, a small Belgian village. Although the German Army was victorious and almost overran the French Army, there was a loss of 3,000 German soldiers and 5,000 French soldiers during this first battle on the hills around Neufchâteau. Julius was amongst these victims. He fell on August 23, in Bièvre, 40km west of Neufchâteau.

At the beginning of WWI, the soldiers still fought the old-fashioned way, in hand-to-hand combat, supported by troopers. When General Major Max von Pfuel lead the 30th Infantry brigade of the Rhineland to the village of Bièvre, they were confronted with unexpectedly heavy civil resistance. Shots from the windows of the houses threw the soldiers into a state of panic. Perhaps Julius became a victim of such an attack.

When we visited the small military cemetery of Neufchâteau-Malonne in summer 2014, we couldn’t find the name of Julius. He was probably buried in Bièvre and perhaps later re-buried in the larger cemetery of Anloy, which was only established in 1916. But most of the fallen soldiers were quickly interred in mass graves that can’t be located today.

It’s hard to imagine what this loss meant to the Tobias family: to his parents Moses and Jettchen, who could not bury their son at home; to Lina, who lost her twin brother; to his brothers Moritz, Albert and Max, who served their country as well and still didn’t know that the slaughtering on the battle fields of Europe would go on for more than four years. For the Jewish men, it was never a question to be loyal to their fatherland and prove their patriotic mind, even though they had no reasonable chance to achieve higher military ranks. Many of those who were awarded an Iron Cross for their bravery should only realize in 1942 that it was worth less than a tin plate. 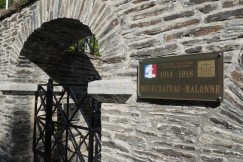 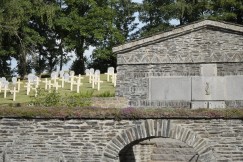 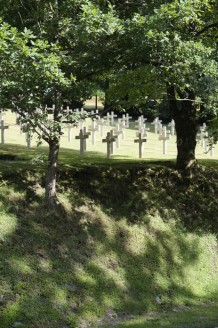 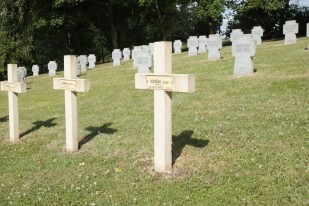