Johanna married the tinsmith Herzl „Hermann“ Hönigsberg (born on June 11, 1880 in Kaboldi, Hungary, today Kobersdorf, Austria) on April 24, 1908 in Frankfurt on Main. She worked as a saleswoman at the time and lived at Gaußstr. 10. On Februar 17, 1910 their daughter Antonie „Toni“ was born in Frankfurt. In November 1918 Johanna and Hermann moved from Hanauer Landstraße 110 to Roseggerstr. 9.

Dora married the opera singer Johann Heinrich „Hans Heinz“ Gräf (born on July 22, 1883 in Frankfurt, nephew of the later mayor Eduard Gräf) on September 17, 1913 in Frankfurt. On March 3, 1919 their son Hans Berthold was born in Mainz.

Hans Heinz Gräf founded the „Sander-Gräf-Bühnen“ after WWI with his partners Max Haas and Alexander Sander, a drama theater which also gave operas and operettas. Around 1928/29 Hans Gräf quit the cooperation and took over the Lichtspiele Bockenheim at Leipziger Str. 29, a cinema with 250 seats. Later he also ran the Palast-Lichtspiele at Rödelheimer Str. 6 with 336 seats. The family lived at Goetheplatz 5 at the time.

Minna married Alex Fernich (born on October 18, 1883 in Klotten on Mosel), who took over his father-in-law’s butchery in Linz. Daughter Hilde, a „sunday girl“, was born on August 14, 1921. She attended the girl’s school of the franciscan nuns in Linz.

Julie Marx, née Oestreich died in 1931 and was buried at the Jewish cemetery of Linz.

Toni Hönigsberg moved from Aschaffenburg back to her parents in Frankfurt on February 19, 1932. In September 1933 Johanna and Hermann Hönigsberg emigrated to Palestine. Toni de-registered on November 8, 1934 and moved to Damascus.

Ricka’s first husband, the merchant Ludwig Gustav Cahn from Gießen, died on January 21, 1928 at 45 years old in Frankfurt. In the spring of 1936 she married the widower Arthur Decker (born on September 2, 1881 in Marnheim, Donnersbergkreis) in Frankfurt. They moved to Alzey, Spießgasse 26.

In July 1937 the Gräfs sold their cinemas. From the proceeds of RM 25,000.– they could buy a villa at Bockenheimer Landstraße 69 after clearing their debts. Dora and Hans renovated the house, opened a Jewish boarding house in October 1937 and also offered lunch table. The house had 13 rooms, a bath on each floor, six attic rooms and a big garden. Dora and her husband lived in two rooms on the first floor. Son Hans junior, who did a trading apprenticeship, had an attic room on his own and enjoyed his freedom away from his parent’s controll.

Soon they found tenants for the other rooms, including bankers and entrepreneurial families (Schweitzer, clothing factory, Kaiserstr.; Councillor of commerce Gerst, department store Tietz; Österreicher, rubber ware, Kaiserstr.). In a letter to her sister Johanna from February 1938 Dora described some of them as being quite spoiled and unpleasant, but surely she was happy to have filled to capacity so soon. The Gräfs employed a house maid, a servant and a cook for their boarding service.

Alex and Minna Fernich sold their house in Linz in 1937 and the family moved to Frankfurt with father Aron Marx. They lived at Bockenheimer Landstraße 101.

Ricka had a breast surgery at the hospital of Alzey in January 1938 due to cancer. However she didn’t recover and died in Dora’s house on April 21, 1938. Her husband Arthur Decker emigrated to the United States in August 1939, married again and died in Manhattan, New York on March 27, 1943.

Hans Berthold Gräf played for the dance band of Heinz Grimm in several German cities between 1939 and summer of 1941 as a drummer, at last in Chemnitz, when he was prohibited the exercise of profession. He came back to Frankfurt and was forced to work as a heating installer.

On September 15, 1941 both Dora and her son Hans were arrested again. The occasion is unknown, although Hans was already in the sight of the Gestapo for quite some time since he played forbidden Jazz and once was sentenced for hoarding food for the Jewish renters at Bockenheimer Landtstraße.

Dora was sent to the women’s concentration camp Ravensbrück. Hans spent two months at Klapperfeldstraße prison and was sent to the concentration camp Mauthausen in Austria on November 15, 1941 (prisoner’s number 2644, protective custody). He was deployed at the labor camp Vöcklabrück among others and released on May 5, 1945. In 1943 he also had spent six months at prison for having talked to prisoners of war.

Hilde Fernich boarded the „S.S. Mouzinho“ on August 20, 1941 in Lisbon, one of the last boats that took Jewish refugees from Europe to the US. A second grade cousin, Rosa Baer, welcomed her in New York.

Minna Fernich and her husband Alex were deported from Frankfurt to Lodz on October 20, 1941. Alex died on July 31, 1942 in the ghetto allegedly due to myocardial insufficiency. Minna was killed at the extermination camp Chelmno on July 5, 1944.

Dora Gräf was „selected for extermination” by physicians on March 5, 1942 and killed at the death institution Bernburg on Saale. Her ashes were sent back to Frankfurt and a friend took care of a burial in her father’s grave at the Jewish cemetery.

Hans Berthold came back to Frankfurt after the war. In 1947 he and his friends opened the „Hot Club“ in the basement of his parents‘ bombed house. During the Nazi-era „Hot Clubs“ had been a common term for forbidden swing- and jazz meetings. After the war Horst Lippmann and Olaf Hudtwalcker tried to establish modern jazz under the same label from Frankfurt throughout Germany by sessions, record nights and lectures. When in July 1950 the house at Bockenheimer Landstraße was sold the club found a new home at Myliusstreet. In 1952 a real „Jazzkeller” could be established again at Kleine Bockenheimer Str. 18a, the legendary „Domicil du Jazz” which still exists today.

Hans lead his own combo under his name until the early 1960s. They mainly played at special services clubs. Charly Petri, Fred Ulatowski, Emil Mangelsdorff and Heiner Merkel were members of his band.

His aunt Johanna Hönigsberg came back to Frankfurt after the death of her husband (died December 18, 1946, buried in Tel Aviv) and lived at the Jewish senior home at Gagernstraße. Johanna died on March 13, 1966 in Frankfurt. Her daughter Toni also came back to Frankfurt in 1949. She married Stefan Maas (born August 28, 1907 Bayreuth, died January 4, 1981  Frankfurt). The couple had no children. Toni died on February 12, 2014.

On May 20, 2016 there were two Stolpersteine placed for Dora and Hans infront of the house Bockenheimer Landstraße 69. 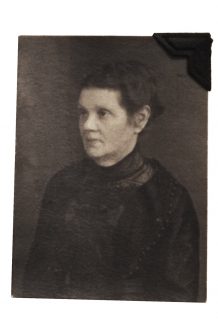 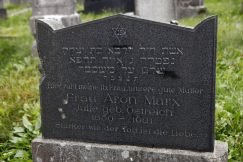 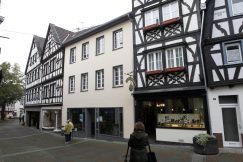 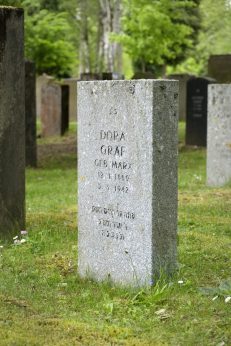 Memorial stone for Dora Gräf at the new Jewish cemetery. Her ashes were buried in the grave of her father Aron Marx. 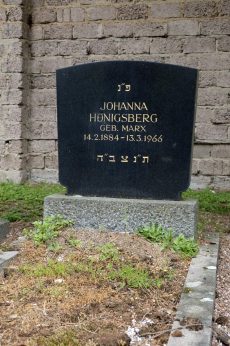 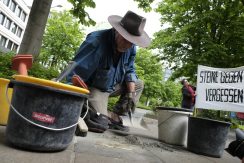 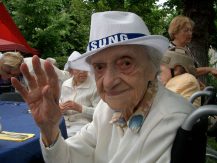