Isaak Oestreich was the son of Nehm Oestreich and Jendel Isenburger from Langstadt in Hesse, today part of Babenhausen. He was born around 1811. Isaak became a cattle dealer and married Hanche Kahn from Aschaffenburg. Her father Abraham also traded cattle.

Isaak’s father died young and his mother then married Emanuel Lichtenstein, with whom she had three more children apart from his sister Bele Oestreich (* 1814).

At the age of 32 Isaak filed for a writ of protection at the Grand Duke, which he needed as a Jew to get the permission to marry and settle. But only his third application from January 20, 1844 was successfull and finally on March 8, he was delivered his own writ of protection:

This protection however only includes him, his wife and children, as long as they are unmarried living with him or with someone else who supports them; but in case they want to work on their own or want to get married, they have to apply for Our protection by proving the necessary properties to be a Protected Jew.

They got four children. Their first daughter Babette (*1844) died only seven years old. Son Nehm „Nathan” (*1846) took over the trader business from his father, but moved away from Langstadt with his wife Guthal to live with his daughter Settchen Salomon at Neuwied and passed on his business to his son Julius. Daughter Jendel „Jettchen” (*1848) married the butcher Moses Tobias and also moved to Neuwied. The youngest daughter Gudel „Julie” (*1852) married the cattle dealer and butcher Aron Marx at Linz on Rhine

Isaak survived his wife Hanche for nine years and after his death in  March 1891 was buried at the Jewish cemetery of Babenhausen.

Max Oestreich (* 1909), son of Julius, was the last grandson of Isaak and Hanche, who left Langstadt in 1939 and fled through Lisbon to the United States. He died in 2009 in Israel.

Children and grand children of Isaak and Hanche: 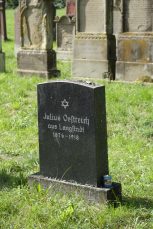 Grave of Julius Oestreich in Babenhausen 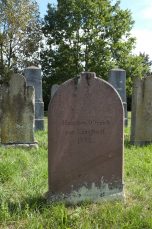 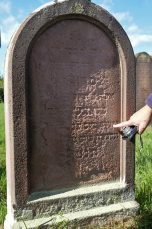 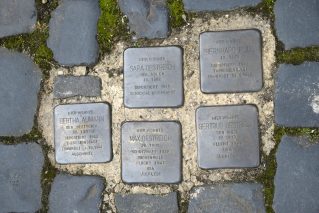 Stolpersteine for the Oestreich family in Langstadt infront of their house.

Grave of Guthal Oestreich in Neuwied 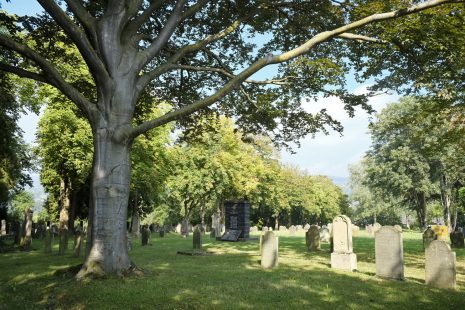